Do you have questions about cannabis DUI terminology? You are not alone. The lingo around cannabis DUI charges can be a confusing alphabet soup of acronyms, and the exact definitions may depend on where you live. Different states have different definitions, so it is important to talk to a lawyer in your area that knows DUI law in your area.

A cannabis DUI charge or arrest can be expensive, and the laws are constantly changing. Even medical cannabis patients who have followed the law and done everything right can still be charged with a cannabis DUI. It is important to consume cannabis responsibly, know the facts, and have a proactive legal plan. To find out specifics for cannabis DUI in your state, contact a DUI lawyer in your area.

Cannabis is most commonly tested in urine or blood. Cannabis drug test results depend on factors such as how long ago you consumed cannabis, how much cannabis you consumed, and individual differences in how fast cannabis is cleared from your system.

Here is a comparison chart of urine and blood tests for cannabis.

How Long After Consuming Cannabis Does THC Show Up on a Drug Test?

THC (or delta-9 THC) can stay in the body and show up in drug tests for days, weeks, or even months after consumption. THC and its metabolites are fat-soluble, so they can be stored in fat cells and released slowly over time. That is why some studies suggest that exercise can increase the chances of a positive THC drug test, even if someone has not consumed cannabis recently. 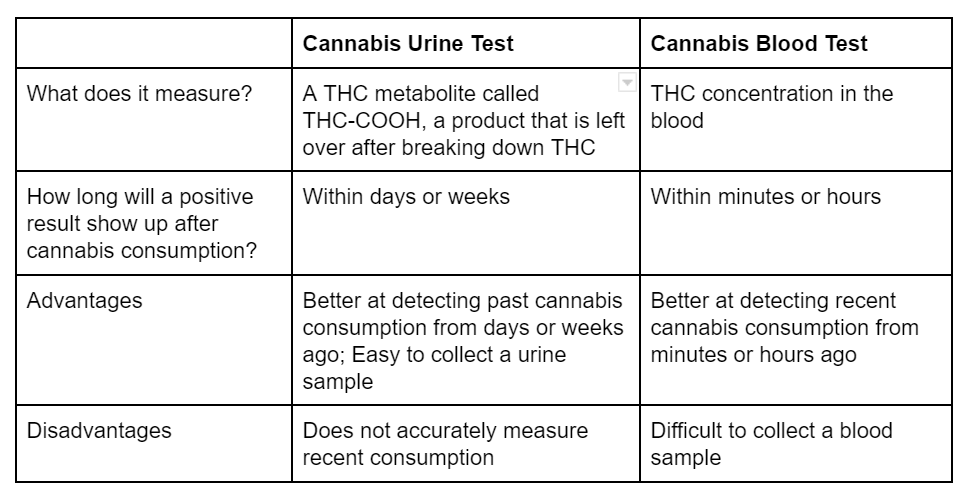 Police can require any driver to take a cannabis drug test under the concept of “implied consent,” which means that under the law any driver automatically consents to drug or alcohol testing. If a driver refuses to take a police-ordered drug or alcohol test, they can face serious consequences such as losing their driver’s license, or the refusal can be used against them in court proceedings in a cannabis DUI arrest or charge.

Are There Cannabis “Breathalyzer” Tests?

Unlike alcohol, there is no breathalyzer test for cannabis, THC, or THC metabolites. As states are legalizing medical and adult-use cannabis, public health officials and law enforcement are increasingly concerned about more drivers on the road driving under the influence of cannabis. Scientists are working on a THC breath-scanning device, but so far it is unclear whether there will be accurate cannabis breathalyzer tests in the future. The best advice when it comes to cannabis and driving? Don’t drive high.

Unlike THC, CBD from hemp is non-intoxicating. Products derived from hemp that are less than 0.3% THC are federally legal. However, a cannabis drug test could still detect trace amounts of THC from full-spectrum CBD products. CBD consumers should carefully check products for THC percentages, and buy CBD products from reputable companies with third-party lab testing.

Concerned About Drug Testing With a Cannabis DUI? reepher Could Help!

Considering most states have no minimum THC threshold for a DUI conviction, cannabis consumers face serious risks if they drive with the slightest trace of THC in their system. With few exceptions, police can charge a driver with a cannabis DUI no matter how little THC is in their drug test if their driving behavior suggests or implies intoxication. The penalties drivers will face for a cannabis DUI conviction are severe, and not to be taken lightly!

If you’re a cannabis consumer concerned about potential cannabis DUI charges, check out what a reepher membership has to offer.

What Should You Do if You Are Pulled Over?

If you are pulled over by police, remain calm, use your turn signal, and pull your vehicle to a safe location on the right side of the road. Follow the officer’s instructions, stay calm, answer questions, and provide the requested documents.

What Happens if You Have a Medical Cannabis Card and Are Pulled Over in Missouri?

What if Police Suspect You Are Driving Under the Influence of Cannabis?

Unlike searching a residence, police do not need a warrant to search your vehicle if they have a reason to suspect you have been consuming cannabis, such as smelling cannabis in your car.

Can You Get a Cannabis DUI if You Are a Medical Cannabis Patient in Missouri?

According to the state of Missouri, a medical cannabis card “does not offer individuals protection from violating laws pertaining to operating a motorized vehicle while under the influence. Nothing in Article XIV permits a person to operate, navigate, or be in actual physical control of any dangerous device or motor vehicle, aircraft, or motorboat while under the influence of marijuana.” Therefore, even if you have a medical cannabis patient card in Missouri, you can still be charged with a cannabis DUI.

What Are the Penalties for Cannabis Possession in Missouri?

What About Getting Pulled Over With Cannabis in Columbia, Kansas City, and St. Louis?

Starting in 2004, Columbia police can no longer arrest first-time offenders with less than 35 grams for cannabis possession. These offenders would face a fine instead of up to $300.

Starting in 2017, Kansas City reduced its fine to $25 for first-time cannabis possession of fewer than 25 grams. Then in 2020, Kansas City eliminated this first-time fine.

Starting in 2013, St. Louis police can no longer arrest first-time offenders with less than 35 grams for cannabis possession. These offenders would face a fine instead of up to $300.

A cannabis DUI arrest or cannabis DUI charge in Missouri is expensive, and the laws are constantly changing. Cannabis DUI charges disproportionately impact people without the financial resources to defend themselves and access legal defense. That is why it is important to consume responsibly, know the facts, and have a proactive legal plan.

It is imperative for cannabis consumers to understand their rights as drivers. You deserve quality representation in the event of facing cannabis DUI charges. At reepher, we help cover these and related costs.